Joyful Journey of “What’s Wrong with Secretary Kim”: From a Web-novel to a Webtoon and TV Drama

Joyful Journey of “What’s Wrong with Secretary Kim”: From a Web-novel to a Webtoon and TV Drama 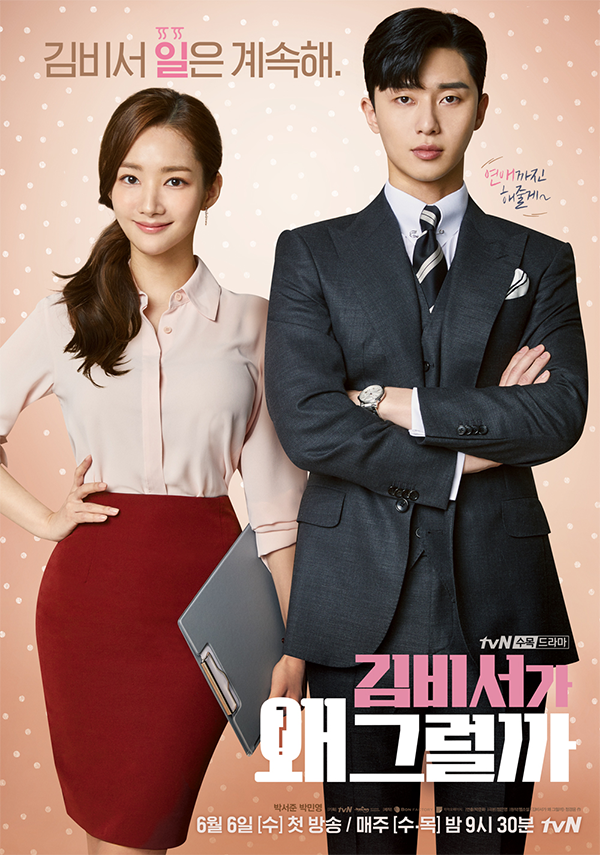 Web-contents, once considered a mere subculture for young consumers, are now gaining a reputation as a new and highly desired type of media in relevant markets. Korean contents markets have witnessed the expandability of numerous web-contents. Lee Soo-ah, a writer who has written two web-novels said, “Web-contents have fewer limitations in their production processes, so authors are freer to show their unique style. This results in more unusual and broader ranges of topics.” She also said, “Another thing that makes web-contents appealing is that they allow writers to complete a story in a relatively short period of time. For these reasons, the perceived value of web-contents has recently increased considerably in the market.” TV drama adaptations of web-contents started around 2010 with shows such as tvN’s The Great Catsby (aired in 2007) and KBS’s Marry Me, Mary! (aired in 2010) and have since become more commonplace. This trend reached a peak this year with seven web-content based TV dramas that are currently in production or have been aired. However, adaptations of web-contents are not without their drawbacks and risks. If a writer or a producer ignores differences in media format and tries to replicate every aspect of the original source, or, on the contrary, merely conveys the ‘basic concept’ of the original source, the adaptation can easily fail. This delicate balance makes the success of TV drama What’s Wrong with Secretary Kim even more noteworthy as it is the perfect example of the transformation of an intellectual property (IP) that Korean contents providers have been looking for. What’s Wrong with Secretary Kim was originally a web-novel of the same name written by novelist Jeong Kyeong-yoon. It was published on the web-novel platform Kakao Page in 2014 and recorded the highest sales among all romantic novels, attracting 50 million readers. The webtoon version of What’s Wrong with Secretary Kim, published online in 2016, was also a huge success, attracting more than two hundred million viewers and 5.8 million subscribers. Finally, with aggressive marketing efforts of the Kakao Page, a drama version of What’s Wrong with Secretary Kim started airing on June 6, 2018n. The first episode received a rating of 5.8%(NLSN Korea) and the show’s highest rating was 8.7%. The show ended on July 26 with numerous favorable reviews. Thanks to the show, Park Seo-joon (the show’s main actor) solidified his reputation in the movie/drama market and Park Min-young (the show’s main actress), earned the attention befitting her long and rich acting career, finally imprinting her name on the hearts and minds of audiences nationwide. What’s Wrong with Secretary Kim is a story about two people who share the same hurtful past, but eventually fall in love after slowly realizing how they feel about each other. The plot is simple and clear, but this simplicity is also the reason why the drama has been criticized by some audiences as having limited and weak narratives. The unique, individual personalities of the protagonists and the strong chemistry between them partially compensate for this flaw, but not entirely. In fact, this simplicity continued to be raised as a concern when Secretary Kim was adapted into different media formats. How did each media format settle the issue? Web-novels can give readers detailed descriptions of various situations and the inner thoughts of each character. Webtoons, on the other hand, are good at delivering uncomplicated plots using a limited number of characters; this is due to their inherent short-segmented structure. Maybe these two formats, to some degree, would have been more fitting than a drama for a story like Secretary Kim. However, when producers began working on the drama version of Secretary Kim, which would consist of sixteen one-hour long episodes, the biggest question was: Would the drama be able to adequately express the original content? 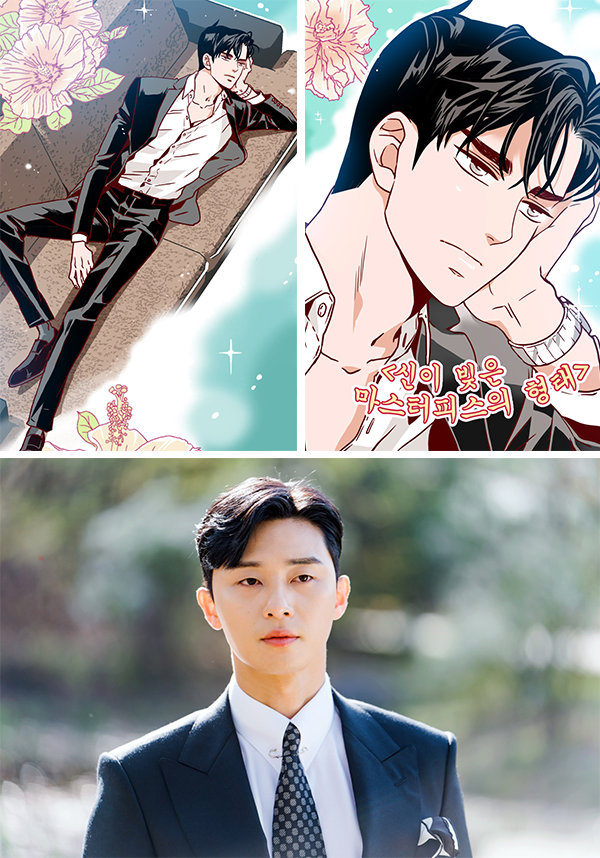 Part 2. Clever Strategy for Each Adaptation Leads to Serial Success

In short, the answer was “yes”. Both the webtoon and drama version of Secretary Kim were able to preserve the essence of the original work, and as a result attracted a considerable number of fans, no matter whether or not they were familiar with the original version of the story. The webtoon version of Secretary Kim succeeded in abbreviating the source text. The unrestrained use of symbolic images and unrealistic depictions, which is a distinct feature of comics, played a great part in this. Also, the in-depth descriptions of the characters’ inner state of mind were also moderately reduced since webtoons have a limited ability to describe an individual’s thoughts. These processes resulted in compact narratives that encouraged readers to actively follow the story development and psychological changes of the characters. Webtoons excel at adapting short, simple stories. However, the drama adaptation of Secretary Kim is something different entirely. Kim Seon-tae, the director of last year’s Avengers Social Club, a TV drama adapted from Buam-dong Revenge Social Club, a webtoon created by SajaTokki, elaborates. “A TV drama adaption of a webtoon has its merits, but it is also a challenge to maintain the original story’s unique charm and stretch the webtoon’s short tempo into at least 10 TV episodes that are each 60 to 70 minutes long. Some webtoons are difficult to adapt into TV dramas, because they make use of materials that work best in a webtoon format or involve plots that are just too simple to extend. Also, trying different approaches to overcome these challenges carries the risk of alienating the viewer, who may be used to the original webtoon. Producer Park Joon-hwa who directed What’s Wrong with Secretary Kim was also faced with the challenge of expanding the storyline. This is especially difficult when the original work has a lot of fans. “To solve this, I thought of adding a love triangle involving Young-Jun’s brother Lee Sung-yeon (played by Lee Tae-hwan), and family issues involving the characters’ parents. Doing so would have added more drama, but could also have damaged the vibe and details of the original story in some ways and alienated viewers. So I decided to stick with the original,” says Park. Instead of changing the narratives, Park found a clever alternative. He made use of supporting characters that had minor rolls in the original webtoon and actively utilized lots of video effects. By doing so, he gave audiences more to enjoy while maintaining the integrity of the two main characters, who were the reason the webtoon and its drama adaption became so popular. In the drama adaption, the supporting characters played a part in progressing the romance of the main characters. For example, in the drama adaption, CEO Park Yoo-sik’s (played by Kang Ki-yeong) secretary Seol Ma-um (played by Ye-won) takes a picture of Secretary Kim on a blind date and mistakenly sends it to Yoo-sik. Yoo-sik shows it to Yeong-joon, which causes Yeong-joon to angrily interrupt the blind date. The original webtoon episode simply ends with Secretary Kim going on a blind date unbeknownst to Yeong-joon, with Secretary Kim continuously comparing her date to Yeong-joon. In addition, by using computer graphics and sound effects not widely used in other TV dramas, What’s Wrong with Secretary Kim successfully maintained the vibe of the original. Normally, webtoons amplify emotions with exaggerated and unrealistic visual effects, but TV dramas need to be more realistic. The drama version of What’s Wrong with Secretary Kim used various methods to narrow this gap between dramas and webtoons. For instance, the drama used computer graphics to comically portray the scene where Park Yoo-sik describes the relationship between Secretary Kim and Lee Yeong-joon as a rotten apple. Computer generated light effects were also used in the scene where Yeong-joon talks about his own ‘aura’. Jeong Gyeong-yoon, the author of the original novel said, “The novel gives readers a chance to actively participate in the experience by making them savor the pauses between each sentence and imagine each scene. Screen adaptations tend to deliver a fully visualized scene, making the pace and the vibe feel very different.” She added, “It is fascinating to experience the same story in different ways”. The harmony between the two main actors—which made audiences feel as if the characters came straight out of the webtoon—was indeed ‘the cherry on top’ of the drama’s success. After the drama’s final episode, Park Min-young said in an interview that she had lost over 4kg and tried her best to copy the clothes and makeup worn by Miso in the webtoon to better portray the character. Park Joon-hwa said, “We tried to enhance the entertainment value of the content itself by using every method of expression possible. We especially tried hard to maximize the chemistry between Park Seo-joon and Park Min-young’s in every scene. 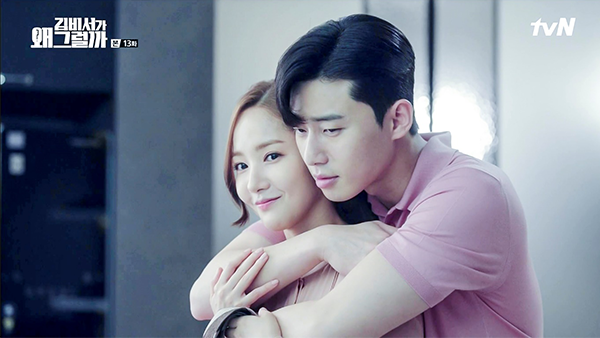 To summarize, the TV drama version of What’s Wrong with Secretary Kim overcame the limits of the original story’s simple narratives exceptionally well. Capitalizing on the synergy between the main actor and actress, it highlighted the character interactions of the original, and made use of supporting characters to add extra plot twists while still preserving the main plot and giving audiences more to enjoy. The special effects used, which had rarely been seen before in TV dramas, also served to hold the attention of audiences. Through these efforts, the drama version of What’s Wrong with Secretary Kim preserved the main contents and tone of the original novel and webtoon, while providing its own unique entertainment value. Typically, only web-contents that are extremely popular are ever adapted into TV shows. If the adaptation fails to meet the expectation of the original’s fans, the adaptation is unlikely to receive good reviews. TV adaptations of web-contents must compete with other TV programs airing during the same time slot AND their own original counterparts, which is not an ideal situation for content creators. This is why so many TV dramas adapted from original web-contents have failed. The huge success of What’s Wrong with Secretary Kim across so many different platforms shows the importance of securing a high-quality IP. It also gives us an example of how contents should be adapted to suit each different media platform. Although What’s Wrong with Secretary Kim is not perfect in all regards, it may be as close as we can get to ‘respecting the original, but adding the platform’s unique charm into the adaption.’ The specifics as to how this can be achieved obviously differ depending on the characteristics of the original content and the platform(s) being utilized. For example, a movie adaption cannot avoid being criticized for being unfocussed and predictable if it only tries to copy and condense another source within an approximately 2-hour time limit. What’s Wrong with Secretary Kim is meaningful as an example of one of the many ways of using an IP. “It’s difficult to decide which webtoon is suitable for TV adaption. No webtoon has the perfect narrative or characters, especially when it is adapted for TV. However, if there is one thing that particularly stands out, should it be the narrative or character portrayal, you should use it as your spearhead and push forward. I think the key to success is how much confidence you put into this push,” says Oh Gwang-hee, the CEO of Bon Factory, the publishing company responsible for turning What’s Wrong with Secretary Kim into a TV drama. Maybe these words are the key to successful web-content adaptation.